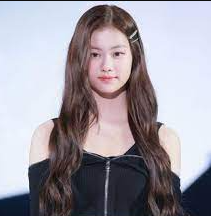 A fresh turn has been added to the story of the bullying scandal involving Kim Garam. It has been reported that Kim Garam, a former member of LE SSERAFIM, has been subjected to bullying since returning to school.

After losing his job as a K-pop idol, the former idol went back to school, but things did not go particularly well for him.

On August 1, a Twitter user by the name of oncemimosa posted a picture of Garam’s school desk, which was covered in rude comments directed at the former member of LE SSERAFIM. This started the conversation.

Kim Garam experienced bullying when she was in middle school. Her classmates made fun of her congenital condition brachydactyly by writing graffiti on her desk that said things like “crazy bitch” and “r*tarded” and spreading photos that they captioned with words like “disabled” and “r*tard.” The truth about Kim Garam, demanding justice for Garam, and Kim Garam

There is some doubt as to whether or not this is actually her workstation; however, it does have her name tag attached to it and the tabletop is covered in slurs and other offensive language.

It is quite obvious that the former K-pop idol will have a difficult time readjusting to regular life after being kicked out of LE SSERAFIM, although we are unsure whether or not the desk belongs to the ex-idol.

The classmates of Garam have always been a source of annoyance and harm to Garam; today, a photo of Garam’s desk was published, on which one of his classmates had written insults to him. On the table, as seen in the photo, the words “Kim garam” can be seen written out.

The bullying scandal involving the former member of LE SSERAFIM has taken a new turn, and as a result, K-pop fans are reevaluating their position on the most recent viral case.

K-pop fans are curious as to whether or not it was actually Garam who was being bullied by her classmates, despite the fact that the authenticity of the desk photo has not been verified.

K-pop fans who saw the images shared their reactions on various social media platforms after seeing them.

Some people started using the hashtags “TheTruthAboutKimGaram” and “JusticeforKimGaram” because they felt sorry for the person who used to be a member of LE SSERAFIM.

On the other hand, some people didn’t believe it and questioned why her supporters continued to defend her even to this day.

Even though she had been bullied in the past, many Internet users expressed their opinion that she should not be bullied in return because two wrongs do not make a right.

Are you content at this moment? The real victim is the 16-year-old child whom you bullied, made fun of, and used as a punching bag on Twitter; he or she is now the real victim. Do you have the slightest bit of guilt? remorse? You ruined everything for this child. garam is very strong and kind. If she forgives, then I will not either. #JusticeForGaram

If any of you are wondering about the veracity of the picture that was posted of the desk, it was uploaded by the same user who uploaded the full picture of G and her classmates making the sexual comment.

On July 20, HYBE and Source Music issued an official statement to announce that the company had decided to terminate its exclusive contract with the former member of LE SSERAFIM, who was at the center of rumors pertaining to school bullying. The member was involved in the controversy because of his alleged involvement in the bullying of other students.

In addition, they issued one more brief statement in which they admitted their ineffective management of her bullying case.

After Kim Garam’s departure from the band, it is shown that LE SSERAFIM is enjoying themselves more

K-pop groups suffer significant losses, both monetarily and in terms of their mental health, as a result of scandals. Nevertheless, there are times when, considering the bigger picture, this is the choice that will serve you best.

Fans of Korean pop music have noticed that LE SSERAFIM appear to be in a much better mood since Kim Garam was kicked off the group.

The members of LE SSERAFIM can be seen in a video that was uploaded to the group’s YouTube channel on July 20. In the video, they are seen celebrating the successful conclusion of their debut promotions by having a luxurious staycation at a hotel.

Members of LE SSERAFIM had a good time together while wearing matching sets of pajamas. They did activities such as eating delicious food and playing games.

On the Show Champion stage, the supporters of LE SSERAFIM do not mention Kim Garam during their chant.

In the midst of the controversy surrounding bullying, Nam Joo-hyuk attended a script reading for the movie Vigilante.

The allegations of bullying made by Nam Joo-Hyuk have been met with a different reaction from the media than the allegations made by Kim Garam.

Following the video’s dissemination, it quickly became a topic of heated debate among fans due to the fact that the band appeared to be in a much better mood following Kim Garam’s departure from the group.

After the departure of former member Kim Garam, the members of LE SSERAFIM are now Sakura, Kim Chae-won, Huh Yun-jin, Kazuha, and Hong Eunchae. The name of the group is an anagram of the phrase “I’m Fearless.”

They made their debut on May 2, 2022, when they released their first extended play (EP), titled