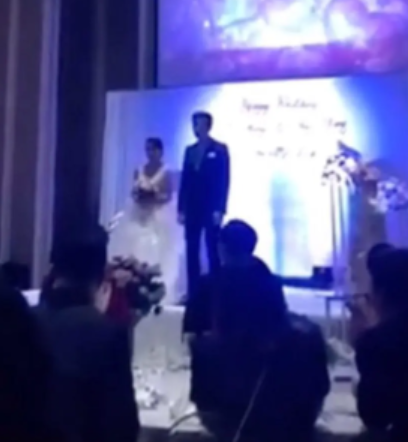 FUJIAN, CHINA: A video from 2019 has recently resurfaced depicting a groom exposing his bride’s affair on the day of their wedding by playing an explicit video of her in bed with another man.

This video has gone viral in China, startling internet users all across the country. At their wedding reception in Fujian, which was held in the province’s south-eastern part of China, the couple can be seen heading down the aisle.

When they do finally make it to the centre of the stage, the footage is reportedly projected onto a massive screen by a projector and plays for a total of five minutes. According to some versions found online, the film in question was allegedly played for the unfaithful fiancée in front of her family and friends after it was discovered that she had been having an affair with the spouse of her pregnant sister. This was allegedly done in order to shame her.

A cheating scandal has rocked the New York Police Force’s (NYPD) examination for sergeants, even as the department battles with huge resignations.

The emcee makes the following announcement as the newlywed pair is seen in one of the videos walking down the aisle and later standing on a stage during their wedding reception: “Now we are going to show you the videos of how the newlyweds grew up.” However, a little while later, the projector begins broadcasting a video that contains explicit content. The scene then cuts to the groom criticising the bride in front of everyone while asking, “Did you think I didn’t know about this?” After that, the bride throws her bouquet at her new husband. Not long after that, their families and friends decide to keep them apart.

It is believed that the two further videos, which together last for a total of five minutes, contain sexual footage of the bride and her brother-in-law.

Citing sources close to the situation, Apple Daily reports that the couple has been together for two years as a couple and that they were engaged six months ago. After installing a security camera in their future home during the renovation project, the groom is said to have stumbled upon evidence of his bride’s extramarital affair.

According to the article, the sister of the bride was around half way through her pregnancy at the time. According to a prominent Chinese entertainment blogger, the tapes were initially published on a short-video application known as “Aubergine Video.” As a result, the situation came to be known as the “aubergine brother-in-law gate.”

The blogger also asserted that despite the fact that the future bride had been subjected to physical violence by her future husband, she still cheated on him. It is said that he made a commitment to pay for a flat and a car for their union before she gave him her consent to marry him.

The blogger claims that the bride has revealed that she was having an affair. It is said that she and her brother-in-law fell in love after the latter began mediating between her and her fiancé during the course of their quarrel on the use of domestic violence.

According to the article, the bride instructed her future husband to have all of the video recordings from their wedding removed from the internet.

Another gossip journalist, Mr. Zha, is of the opinion that the whole event was just an elaborate PR trick. The author was mystified as to how the video app had managed to get the film in a “exclusive” capacity.

The question was posed, “Who is going to air their dirty laundry on a video website?” The argument was made by Zha. He also brought up the fact that the video app’s logo was visible in the film that was played at the wedding. “In a nutshell, there is only one interpretation, and that is that this is a malevolent marketing gimmick,” he stated. “To summarise, there is only one reason.”

Although video clips from the event have been removed from the Chinese social media platform Weibo, they are still being shared on Twitter and the WeChat messaging service.