Apna NewzLeading The Youth Towards Future
HomeNewsWhat Does TikTok Trend Beveragino Mean? This Trend Is Taking Over The...
News

What Does TikTok Trend Beveragino Mean? This Trend Is Taking Over The Internet 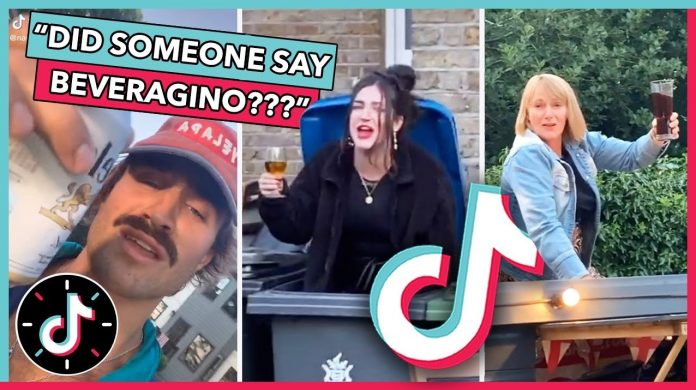 TikTok may make the concept of Beveragino appear more sophisticated than it actually is; yet, the trend has already established its dominance over the platform.

TikTok has introduced a new and entertaining feature for its customers, and it is geared mostly toward those users who take pleasure in staying up to date on the latest trends and completing new tasks. It’s possible that you won’t want to miss out on this, especially if you’re a Tiktoker.

At this time, people utilize the platforms for a variety of reasons; some use TikTok to attract viewers and followers for the purpose of making money and gaining fame, while others use it for the purpose of having fun and experiencing thrills. In either case, it has assisted the TikTokers in expanding their reach to a greater number of people.

In a similar vein, the latest trend is aimed primarily for the enjoyment of all audiences and watchers. In spite of this, the fact that the phenomenon has taken over the platforms will work to your advantage to raise your profile.

What Is Beveragino Meaning On TikTok?

Beveragino is an eloquent term that has been coined to replace the word “Beverage” and is the most popular trend on TikTok right now. It is a straightforward phrase with no cryptic undertones to decipher.

It is referred as as “a refreshing drink with the gals or boys” in the Urban Dictionary. However, on TikTok, the phrase “Did someone say beveragino?” has become quite popular.

Many people have applied it to their relationships with their families, friends, pets, and other people and things. Despite the simplicity of the trend, it appears to be a lot of fun and fascinating without appearing to be trying.

People have frequently engaged in the habit of using buzzwords in their speech “It’s such a beautiful day/evening outside. I’d love to have a beveragino with my buddies, whether they’re boys or girls.”

As soon as the first person utters the term, the remaining individuals start approaching one another and inquiring, “Did someone say beveragino?”

You never know when the other person is going to pop out and ask you a question, which is one of the things that makes this fashion trend so much more entertaining. The fact that things are happening in such unexpected places makes the video that much more interesting and fascinating to watch.

The pattern and the idea that underlies it both appear to be rather straightforward and easy to comprehend. You might want to try out this trend if you are already hanging out with your friends and family or if you are intending to do so in order to have more fun.

Why Is Beveragino Trend Is Taking Over The Internet?

Beveragino is the latest trend on TikTok, and you just have to try it at least once. Over 49 million people have viewed content with the #beveragino hashtag, and thousands of people have liked the posts.

In addition to being fun, a large number of celebrities and TikTok stars have followed it. The fact that it involves drinking even more alcohol while hanging out with one’s closest friends is what gives the trend its edge in terms of pleasure and excitement.

The trend has been tried out by a lot of Tiktokers, and some of them have even repeated it, which shows how addictive it can be. The viewers have expressed how much they appreciated the film after the sudden appearance of the next person.

It appears as though there is just favorable feedback regarding the trend. It appears that a significant number of people appreciate seeing “behind the scenes” footage of videos and actively seek it out.

The Funny Food Origin of the Beveragino as a Challenge

The Beveragino trend emerged in the middle of the 2020s and continues to be one of the most popular choices. It initially seemed to be a problem involving beverages, but then it turned out to be about food, and soon after that, the term itself became a challenge.

It is simple to keep up with the latest fashions in beverages and to use the tagline, “It’s such a beautiful day/evening outside. I’d love to have a beveragino with my buddies, whether they’re boys or girls.”

And then have all of your family members and friends come up one at a time and ask, “Did someone say beveragino?” while holding a beverage in their hand.

You would be able to fulfill the task and take part in the craze if you simply did what was required of you.

Bevaragino is a new form of slang that is gaining popularity as a result of a video that was uploaded on Tik Tok featuring a group of British adolescents using the term Beveragino. We are all aware that new slangs emerge on a regular basis; nevertheless, the question that really counts is whether or not they catch on with people. And if we are to believe the number of views that this TikTok video has received, Beveragino is likely to be around for quite some time because the name itself has a catchy rhythm to it.

Beveragino is an Italian word that refers to a group of friends or other individuals gathering together to drink some beverages at the same time. A young man can be seen in a Tik Tok video that shed light on this new word saying where his buddies were and hoping they were with him for a beveragino. The video brought attention to this new word.

What exactly does Beveragino mean on TikTok?

Beveragino is an innovative new name for many kinds of beverages. It does not signify the beverages themselves but rather the act of drinking them. These movies are typically created by adolescents and other young people who are attempting to have fun while swimming or hanging out in some other setting. Because, when it comes down to it, we could all use a little more beverage in our lives, couldn’t we?

In this video, young women take advantage of the pleasant summer weather to enjoy a beveragino to varying degrees. People are trying to recreate the same carefree but somewhat chaotic energy that was present in the first video that was made in this trend, which can be seen in the majority of the videos that were made as part of this trend. These videos are a sort of homage to the first video that was made by British boys. Some individuals take it in their own direction and turn it into an entertaining video.

The Meaning of #Beveragino Explaned

The hashtag “#beveragino” is attached to a great number of videos that can be seen on Tik Tok. People who have used this hashtag on their video are trying to follow in the footsteps of the currently popular trend in video. Unpredictably, this developed into a trend, and today a large number of people are participating in such trend.

People have adopted the hashtag #beveragino in their own videos for the same reason as this video does: they want to increase the likelihood that others will identify the video immediately and want to watch it. On TikTok, videos containing the hashtag “beveragino” have received 16.7 million views together. Because of this, the beveragino trend is fairly popular, and if you use this hashtag in your video, it will be viewed by more people than if you simply made a video like you normally would.

We have seen a trend where users are using #bevragino rather than #beveragino on some films that are uploaded to Tik Tok. It appears that some persons in these videos speak the term significantly differently than others. I only want to make it clear that these two tendencies are not separate from one another.

On the other hand, I have also seen people utilizing both hashtags when they are posting videos online. Therefore, beveragino and bevragino both refer to the same activity, which is to consume alcoholic beverages with one’s companions.

Is Beveragino A British Trend?

The Beveragino video was initially created by guys from the United Kingdom, but once it gained popularity, other people also began creating their own versions of the video.

People speaking with a British accent can be heard in the video that was created by “noahschnacky,” although in his other videos, he does not talk with an accent. The Beveragino trend is heavily represented by videos from the United Kingdom. I believe that it is that way because the fad was initiated by a British lad, and people are paying their respects to him, despite the fact that anyone, not just those from the United Kingdom, can do it.