Apna NewzLeading The Youth Towards Future
HomeNewsWhat Is The Cause of Explosion in Chicago? What happened & Hoe...
News

What Is The Cause of Explosion in Chicago? What happened & Hoe Many Casualties? 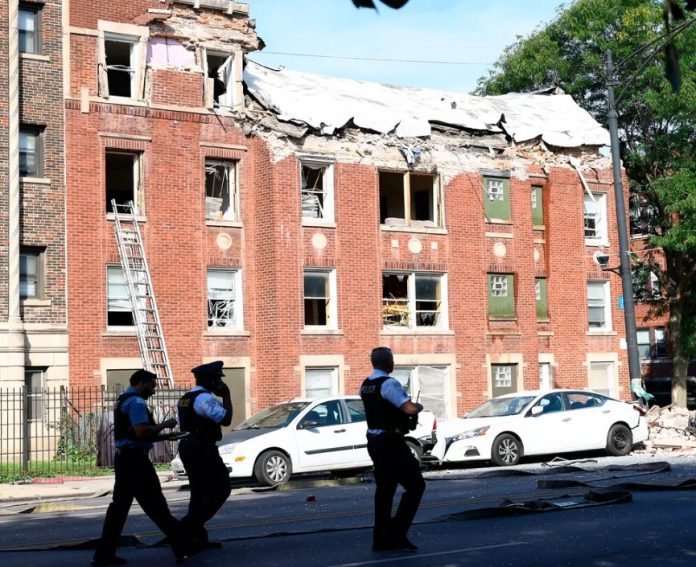 Tuesday morning, an explosion in the South Austin area resulted in at least eight injuries. Let’s examine the details of the Chicago Explosion that occurred today.

What happened in Chicago today?

A spokesperson of the Chicago Fire Department said that a four-story apartment building at 5601 W. West End Ave. exploded at approximately 9 a.m.

A total of ten ambulances were sent to the area, and at least eight people have been transported to hospitals. Two males were carried to Loyola University Medical Center, one in fair to serious condition and the other in serious to critical condition.

A female in moderate to critical condition was sent to West Suburban Medical Center.

Two males were rushed to Stroger Hospital, one in critical to severe condition and the other in fair to serious condition.

According to deputy fire commissioner Marc Ferman, one of the injured victims was in a building across the street at the time.

The Fire Department was compelled to bring in firefighters to shore up the structure while it was being searched. At 11:15 a.m., the building search was still in full swing. According to Ferman, however, authorities believe that everyone has evacuated the building.

A video published on Twitter by the Chicago Fire Department showed that there is a great deal of trash outside the building.

Moreover, Chopper 2 observed debris on the top of a building across the street.

What triggered the explosion?

Kris Habermehl of CBS 2 reported that a natural gas leak is likely the cause of the explosion based on the manner the debris scattered around the structure.

According to Shannon Nelson, who lives across the street, she heard the explosion while she was sleeping.

According to Nelson, his bed nearly shook like an earthquake. Nelson reported that when she went outside, she could smell natural gas.

According to Ferman, the explosion’s official cause is still being investigated. Peoples Gas has disconnected the building’s natural gas service.

According to the Fire Department, the Chicago Police Department Bomb Unit and the U.S. Bureau of Alcohol, Tobacco, Firearms, and Explosives assisted with the response and investigation.

The explosion occurred on the building’s top floor on the eastern side. Numerous bricks and other debris were hurled into the street, causing damage to at least three cars parked along the curb.

The explosion caused the roof of at least one apartment in the building to collapse, as well as the destruction of other windows.

She stated, “We must also show our gratitude to the brave members of the Chicago Fire Department who are attempting to reduce dangerous circumstances.” In total, 135 firefighters and paramedics arrived at the scene.

The Chicago Department of Buildings has also arrived at the scene. According to records of building inspections, the structure has failed 12 inspections since 2010, including two penalties for “failure to repair or replace defective or out-of-service smoke detectors and function continuously.” The issuance dates for these citations are January 2017 and February 2018.

The owner of the building, Roman Viere, released a statement in which he said, “We are heartbroken for all of our residents. This is a horrifying event.” Priority is given to the health, happiness, and security of our citizens.

We are doing everything possible to collaborate with emergency agencies, and we are prepared to take any step necessary to aid our neighbors.

Viere appended. According to Ferman, it is unknown exactly how many people have become homeless.

How Many Have Been Killed In Explosions In Chicago?

At least eight people were hospitalized following an explosion on the West Side of Chicago on Tuesday, according to authorities.

The top floor of a four-story apartment building collapsed shortly before 9:30 a.m., according to Marc Ferman, deputy fire commissioner of the Chicago Fire Department.

Ferman reported that eight individuals were hospitalized, including one person “from the building across the street.”

According to the Chicago Fire Department, three of the hospitalized individuals were in serious or critical condition. The victims sustained burns and severe injuries, according to Ferman.

The explosion also displaced residents, according to Ferman, who added that authorities do not know how many individuals were relocated.

Ferman stated that personnel are “certain we extracted everyone” and have concluded their search for additional victims.

A mass casualty emergency medical services unit and ten ambulances were deployed to the area, according to the department.

The adjacent building was also evacuated following the explosion in the South Austin area of Chicago, according to the fire department.

Images and a video shared on social media by the fire service depicted firefighters and many fire engines congregating near a debris-strewn street. According to footage uploaded by the department, the top level of a building seemed to be damaged.

The fire department did not disclose any additional information regarding injuries or the explosion’s cause.

Ferman stated, “Right now, we do not know what triggered this catastrophe.” It is still being investigated.

Peoples Gas, Chicago’s natural gas utility supplier, dispatched crews to the area, which is “normal protocol,” according to Brendan Conway, Peoples Gas spokesperson, in a statement to USA TODAY.

“Our crews were dispatched to the area to assist with the emergency, but there is no evidence at this time that the incident was related to our equipment or natural gas supply,” Conway said.

The mayor of Chicago stated that she is “closely following” the collapse.

She stated on Tuesday, “My sympathies are with those who were hurt and displaced by the building collapse in the Austin area.”

Christine Fernando, reporter for News Now, can be reached at [email protected] or @christinetfern on Twitter.