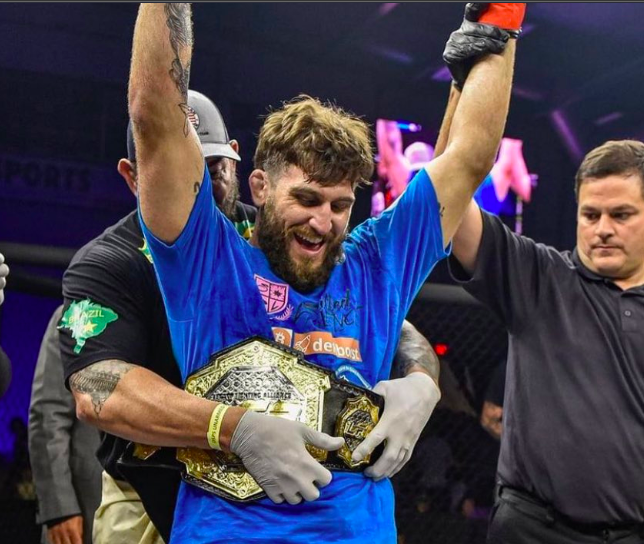 Josh Silveira is a professional mixed martial artist who competes out of the Coconut Creek, Florida, area. He has a perfect record of nine wins and zero losses in his professional MMA career.

The well-known fighter made his debut in the PFL this year after beginning his mixed martial arts career with a perfect record, which included winning an LFA title. In 2021, he competed in the middleweight division of the LFA and won. In addition to that, he has been a part of the American Top Team for a significant amount of time.

The mixed martial arts fighter previously spoke openly with Ariel Helwani about being Colby Covington’s primary training partner at American Top Team in the interview that came before this one. They worked out together in preparation for Colby’s first fight, which was against Kamaru Usman.

Despite the fact that Josh had only one regular fight for the PFL in the 2022 season, he made the most of it by earning an impressive victory via a first-round knockout of Marthin Hamlet on June 17, 2022, at the PFL 4 Regular Season event.

Who Is Josh Silveira MMA?

The PFL fighter’s perfect record includes nine victories, with a finish rate of 89 percent, including five victories via submission, three victories via known out, and one victory via decision. The professional boxer has not lost a fight in his winning streak that currently stands at nine.

Josh competed for the first time against Jahsua March on the preliminary card of Titan FC 56: Soares vs. Whitney on the 23rd of August, 2019. The main event of the evening was between Soares and Whitney. He won the fight by applying a rear naked choke to his opponent.

The fight that was scheduled to take place between him and Jarrod Thomas on February 28, 2020 was called off for unknown reasons. Josh fought Cody Rolling on August 13, 2020, at SFT 23: Jesus vs. Cachorro, and won the fight with a kick to the head in the first round. This was exactly one year after Josh made his professional MMA debut.

The next time Josh competed against Fernando Alvardo was at LFS 93: Petroski vs. Jeffery on October 16, 2020. The mixed martial arts fighter won the fight with an arm triangle choke in the third round. He receives a lot of compliments on his fighting style and how fast he is.

Josh Silveria is currently twenty-nine years old and was born on December 25, 1992 in Miami, Florida, in the United States.

At the Professional Fight League 7 event on Friday, Josh is prepared to compete in the Light Heavyweight division against MMA fighter Omari Akhmedov. His most recent match was against Marthin Hamlet, whom he defeated with a head kick to the knees from the clinch in the first round of their fight.

Given his exceptional fighting skills, it really shouldn’t come as much of a shock that he is having a lot of success so early on in his career in mixed martial arts (MMA). He is the devoted son of head coach Conan Silveira, who competed in the Ultimate Fighting Championship (UFC) on two separate occasions in the year 1997.

In spite of the fact that Josh Silveira, the unbeaten professional fighter for the PFL, has a romantic life with his partner, it is not known whether or not the couple is married.

In December of 2021, Josh and his breathtaking partner went to Denver, which is located in the state of Colorado. The mixed martial arts fighter shared a number of happy photos of himself and his girlfriend on Instagram. During the trip, he was able to spend quality time with the person who meant the most to him.

On Instagram, his stunning girlfriend can be found posting under the handle @zarcharm. On her Instagram account, which currently has 80 posts, she has gained more than a thousand followers. However, for the time being, her account is set to private.

Josh Silveira was born in Miami, Florida, and although he is an American citizen, nothing is known about his religious background.

He holds the 67th spot on the list of the best MMA Light Heavyweight Fighters at the moment. On August 23, 2019, Josh made a winning start to his professional mixed martial arts (MMA) career by defeating Jahsua March. Jahsua March entered the fight with a Pro-MMA record of 3-4-0.

On Instagram, you can find Josh under the verified username @jmdasilv. He is very approachable there. The athlete has built up a following of more than 4,000 people thanks to the 145 compelling posts that they have shared. On Instagram, he is known to provide regular updates about his professional life.

Light Heavyweight action between Silveira and Omari Akhmedov is scheduled to take place at PFL 7 on August 5, 2022.

-When was the last time he was defeated?

-The mixed martial arts fighter has not yet tasted defeat and currently holds a perfect record.

-How many knockouts does he have in professional mixed martial arts?

-Josh has defeated three of his opponents by knockout.

-How many professional mixed martial arts (MMA) submissions does he have?

-Josh has successfully finished off five of his opponents.

-What is Josh Silveira’s exact height to the centimeter?

-The professional mixed martial arts fighter has a height of 6 feet and 1 inch (185 cm).