Who Is Zeenat Simjee? Their Relationship Timeline Explored 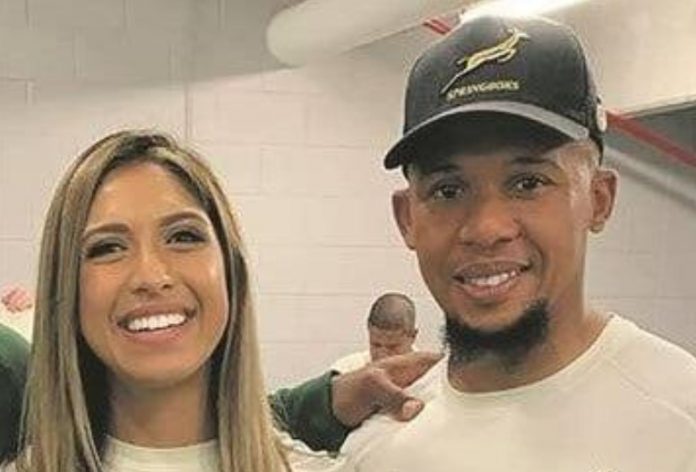 Elton Thomas Jantjies represents the Golden Lions in the Currie Cup, the NTT Red Hurricanes in the Japan Rugby Football Union, and the South Africa national team as a professional rugby union footballer.

He was a member of the South African team that won the 2019 Rugby World Cup. In the championship match, the nation defeated England to win the competition. The Springbok rugby player has once more garnered headlines, but sadly not for his extraordinary rugby talents. Read about the hot issue of Elton Jantjies and his new girlfriend Zeenat Simjee.

Zeenat Simjee is the registered dietitian. She is the first dietician hired full-time by SA Rugby. Simjee is on a mission to raise awareness of the importance of sports organizations employing nutritionists to improve the performance of their athletes.

In 2019, the Springboks men’s squad became the first national team with a full-time dietitian on staff.

Zeenat was instrumental in ensuring the players’ wellbeing off the field, which contributed to Japan’s Rugby World Cup victory.

Zeenat Simjee is currently in the news because her affair with Elton Jantjies has been linked to her. The Springbok fly-half was reportedly spotted entertaining the team’s dietitian at Mbombela guesthouses.

The timeline of Elton Jantjies and Zeenat Simjee’s relationship

During his tenure with the team, Elton Jantjies began an affair with his new girlfriend, Zernat Simjee.

It is unknown when the relationship between Elton Jantjies and Zeenat Simjee began to blossom, but Elton was reportedly wooing Zeenat at two different guest homes in Mbombela the week before the Springboks’ test match against the All Blacks at the beginning of August.

According to the Sunday edition of the Afrikaans newspaper Rapport, Janties booked reservations at a different hotel than his colleagues and the Springbok administration.

The following morning, the rugby player departed the guesthouse and reportedly spent a fortune on expensive champagne, flowers, spa services, and candlelit dinners. A source informed Rapport that the flowers were accompanied by a love note from Janties to Simjee.

Guests at the inn afterwards confirmed that they were astounded to learn that he was entertaining another woman instead of his wife. Elton Jantjies is married to his longtime girlfriend, Iva Ristic. The pair first linked online in 2011, but due to their professions requiring extensive travel, they did not meet in person until 2014. According to Ristic, it was a case of love at first sight.

Elton is the brother of the team’s fly-half, Tony Jantjies. Thomas Jantjies, their father, died in a hospital after being bitten by a bee weeks before he signed with the Stormers. The rugby player referred to his father in interviews as his mentor and kicking coach.

Zeenat Simjee, who was born in 1995, is 27 years old. Although she lacks a Wikipedia page, her name frequently emerges in Springbok’s news. Together with her clients, the sports nutritionist provides tailored nutritional support.

Previously, in an interview with Koketso Kgogome, Simjee explained her career path and frequent misunderstandings about her sector. According to her, dietitians are not food police; rather, they educate other techniques for making durable adjustments that do not guarantee short-term outcomes but rather long-term lifestyle modifications.

The private Instagram account of professional dietician Zeenat Simjee has nevertheless acquired 19.1K followers and 337 posts. Her bio contains a translation of her name into Arabic.

Despite having been spotted with Elton, neither Jantjies nor her have commented on their brief trip in Mbombela. Jantjies and his lifelong partner and wife, Iva Ristic, have three children.

After affair with Elton Jantjies, Zeenat Simjee is sent home.

While in the team, Elton Jantjies dated their new girlfriend Zeenat in secret.

In the week preceding the Springboks’ early August test match against the All Blacks, rumors circulated that Elton was wooing Zeenat at two different Mbombela guest houses. According to the Afrikaans Sunday daily Rapport, Janties made a different house reservation than his teammates and Springbok management.

The rugby player apparently spent a great deal of money on champagne, flowers, spa treatments, and candlelit dinners before leaving the next day. Janes delivered Simjee a love letter in addition to the flowers, according to a source who talked to Rapport.

Later, guests at the guesthouse admitted that they were surprised to discover that he had been entertaining a different woman than his wife. His longterm lover, Iva Ristic, is now his wife.

Elton, the Springbok flyhalf, and Zeenat Simjee, the team dietician, were also removed from Argentina due to rumors of an affair.

How Old Is Zeenat Simjee? Age And Bio

Zeenat Simjee, who is 27 years old, was born in 1995. Although she does not have a Wikipedia page, she is frequently mentioned in Springbok’s news. The sports nutritionist provides individualized nutritional support to her clients.

Koketso Kgogome and Simjee have previously addressed her career path and frequent misconceptions about her field. She contends that dietitians are not food police, but rather teach other skills to aid individuals in adopting long-term lifestyle changes as opposed to short-term solutions.

Although Zeenat Simjee’s Instagram account is private, she has 337 posts and 19,100 followers. In her biography, her name is presented alongside its Arabic equivalent.

Zeenat Simjee Net Worth: Her Salary And Earnings

Due to her many years as a nutritionist, Zeenat’s estimated net worth might be in the thousands of dollars.

In South Africa, a nutritionist can anticipate earning approximately 61,300 ZAR per month. The minimum wage is 28,200 ZAR, while the maximum is 97,500 ZAR (the highest). Therefore, Simjee is predicted to generate revenue within the aforementioned range.

Prior to being fired from her job because of her affair with Elton, she may have had a lavish lifestyle supported by her salary. After the incident, it will be difficult for Zeenat to increase her money.

Jantjies made his Super Rugby debut with the Lions in 2011. Following the Lions’ relegation from the South African conference in 2013, he was loaned to the Stormers.

His stint with the Stormers was a disaster compared to his previous season with the Lions, where he had an 86 percent goal-kicking success rate. He joins the Lions, who were eliminated from Super Rugby competition.

On September 29, 2012, he made his international rugby test debut for South Africa against Australia in the inaugural Rugby Championship. However, his first appearance for the Springboks came in a non-test, uncapped match against the Barbarians at the 2010 end-of-year tests.

Net Worth of Elton Jantjies

He has achieved an estimated net worth of $500,000 as a professional rugby union player.