Apna NewzLeading The Youth Towards Future
HomeNewsWho killed Debbie Gama and what happened to him?
News

Who killed Debbie Gama and what happened to him? 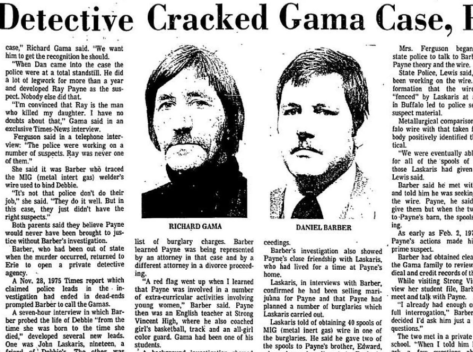 The upcoming episode of Dead Days of Summer will focus on the murder of Debbie Gama, which took place in Erie, Pennsylvania, in 1975. This was an event that jolted the sleepy town at the time.

The body of the high school student, who was 16 years old and had been missing for several days, was discovered adrift in Cussewago Creek in Crawford County. The creek is located in Crawford County. On the day that Debbie was reported missing, she reportedly got into an argument with her mother and then left the house. Her family never saw her again alive after that point in time.

Raymond Payne, Debbie’s favourite teacher from high school, was found out to be the one who committed this horrific deed, which came as a complete and total shock. Despite Raymond’s assertions that a different sequence of events transpired, he was ultimately found guilty of first-degree murder and given a sentence of life in prison for the crime. Complications arising from his infection with COVID-19 led to his death in captivity in the year 2020.

Who was responsible for Debbie Gama’s death, and why?

Raymond Payne was a well regarded educator at Vincent Strong High School, which is located in Erie County, Pennsylvania. Debbie attended this school. She counted him as one of her most beloved instructors. A private investigator that was hired by Debbie’s mother is said to have found evidence of a connection between the slain girl and the high school instructor, despite the fact that the authorities were unable to make any progress in the investigation of Debbie’s murder.

Raymond was taken into custody in 1976 when the authorities followed a lead and discovered copper wires in his possession that were similar to the ones that had been used to bind Debbie before she was slain. Debbie had been strangled. Raymond Payne quickly confirmed his involvement in the killing of Debbie, but he maintained that it was an accident until he was arrested for the crime.

After an investigation, the authorities came to the conclusion that Debbie had been the victim of an assault prior to her murder by strangulation. Payne asserted that he had obtained Debbie’s permission before tying her up and that all he intended to do was snap pictures of her. It is said that she passed away in a tragic accident when the cables suffocated her. Additionally, he asserted that he had never assaulted Debbie Gama in any way.

In 1977, he entered a guilty plea to a charge of murder more generally. He was found guilty of murder in the first degree and given a life sentence by a panel of three different judges. Later on, a former cellmate of Payne’s who was serving time at the same facility in Erie County reported that Payne had allegedly informed him that Debbie’s passing was the outcome of Payne’s lifelong s*xual fantasy.

Where can I find Raymond Payne at this time?

In 1997, Raymond Payne submitted his initial appeal, in which he asked for a DNA test. His appeal was finally granted in 2014, after a number of failed attempts. Payne was found not to have assaulted Debbie Gama after an investigation was conducted into the matter. On the other hand, the judges who presided over his retrial in 2020 found him guilty of murder in the first degree once more. The presiding judge reasoned that the degree of the crime or the absence of an assault does not affect what he did to the young girl.