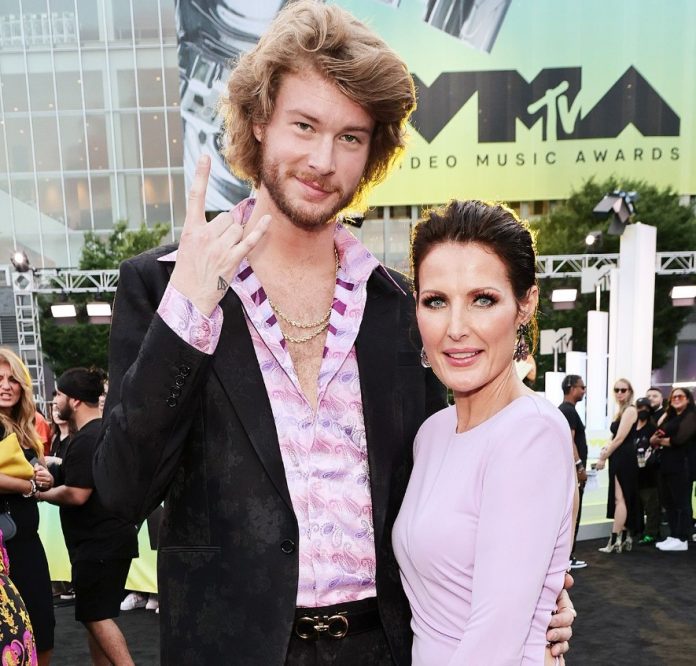 Matthew Raymond Hauri, better known by his stage name Yung Gravy, is a rapper from the United States. In 2017, his song “Mr. Clean” began to acquire traction, which led to a significant increase in his level of notoriety. After gaining widespread notoriety, Yung went on an extensive number of concerts all over the world and produced a great deal of music.

After making an appearance with his partner Sheri Easterling, who is 16 years his senior, the American rapper shared additional details regarding his attraction to mature women. The news that Sheri was romantically linked with a much younger music singer was released on Sunday, and it shocked her admirers.

The artist has a preference for older women over women that are the same age as him. Following a highly publicized divorce from her former spouse, Monty, Sherri made her first public declaration of a new romantic relationship on the red carpet.

At the VMAs, Yung Gravy was seen attending the event with his girlfriend, Sheri Nicole Easterling. Not only did the rapper and social media star make their debut on the red carpet, but it was also the first date between the two of them.

Prior to this, the couple was given a great deal of publicity as a result of Easterling’s ex-husband, Monty Lopez, using the social media platform TikTok to issue a wrestling challenge to the rapper as a means of expressing his disdain of the couple’s relationship.

Their predicament gained notice as Lopez’s TikTok video went viral and got widely shared on the internet. Since the beginning of the month of July, the rapper and Sheri Nicole have been patiently awaiting their first date together.

The rap artist, who is best known for his song “Betty,” has also become synonymous with the notion that he is attracted to older women, and notably mothers. On the Zach Sang Show, he made the statement that “It’s more fun spending time out with them.”

Yung Gravy was asked about his interest in dating older ladies during an interview with Dave Portnoy that was broadcast on the BFFs podcast on August 3rd.

The rapper disclosed his feelings to Rae’s mother in an open conversation. Additionally, he made it clear that Easterling was the one who initiated the action. The rapper said that he intended to take Easterling out on a date, despite the fact that the two had never really spoken to one another face to face.

At the MTV Video Music Awards, rapper Yung Gravy confirmed his connection with Sheri Nicole Easterling by giving her a kiss. Easterling is the mother of a TikTok star.

Addison Rae Easterling, an American actress and social media sensation, has Sheri for a mother. Sheri is also an actress. It is not known how long Yung has been seeing Nicole Easterling; however, the two were first connected in August after Yung Gravy revealed on a BFFs podcast that he intended to take Easterling on a date. It is unknown how long Yung and Nicole have been together.

During a pre-show interview with MTV on the day of the Video Music Awards, Yung Gravy provided some details regarding their collaboration (VMA).

However, the couple has not gone public about their relationship on social media, and Easterling’s bio on TikTok still describes her as a “single mother” even though she has a child with her boyfriend.

In 2016, while he was still enrolled in college, Yung Gravy launched his career as a rapper. He was able to balance college and music commitments appropriately and began uploading his original music to Soundcloud. Making music was more of a hobby for him than anything else. On the other hand, he committed himself to this pastime to such an extent that he left his work in order to spend more time composing music.

After the success of his track “Mr. Clean” across the industry’s most prominent streaming services, he shot to prominence. It has more than 175 million streams on Spotify, making it his song with the most total listens. Following the release of the track, on December 23, 2016, he released a mixtape with the working title Thanksgiving’s Eve. The next year, he came up with two extended plays, both titled Yung Gravity and Baby Gravy, and they were both released. On the other hand, the Baby Gravy EP was released in collaboration with the Canadian rapper bbno$. Up until that point, he had not signed with any record label and had released all of his tracks independently. Following this, he released all of his tracks under the Republic Records label. As at this moment, he is still signed to the label and has not yet either joined or quit the label.

In 2018, he released three singles in addition to an extended play (EP). In that year, he worked with popular rapper Lil Baby on the song “Alley Oop,” which was released as a single. Sensational, Baby Gravy 2 (with bbno$), and Gasanova are the corresponding titles of the three albums that he released over the course of the subsequent two years. The single “Whip A Tesla” from these albums has achieved a lot of success, garnering more than one hundred million listens on Spotify.

The rapper known as Yung Gravy has a net worth of $1.2 million (estimated). Music is his primary means of financial support. He generates a significant amount of revenue from downloads and streams of his music across all of the major distribution channels. In addition to that, he is an entrepreneur who has his own retail establishment known as Creamium. On the website, he sells various articles of clothing, such as t-shirts, shorts, and jerseys.

Sheri Nicole began her professional life as a prominent figure in the world of social media. She first began showcasing her ability on her TikTok account by posting entertaining videos of herself lip-syncing and dancing, and then she moved on to showcasing it on her Instagram account, which she also created.

She has also been highlighted on the Livin the Lopez Life channel that her family maintains on YouTube. On this channel, the Lopez family posts a variety of entertaining and informative films. She inked a contract with the talent agency WME in the year 2020 only recently, as well. In addition to that, she is responsible for choreographing the dance moves for her daughter’s future film, which is dubbed Spy Cat.

In addition to that, she is featured in a few of her daughter Addison Rae Easterling’s TikTok movies and she also co-owns and operates a product brand with her daughter.

Sheri Nicole, also known by her stage name Sheri Nicole Easterling, is a social media celebrity and tiktok star from the United States. Sheri Nicole’s net worth is estimated to be $2 million as of the year 2022. Her social media sites hosted paid advertisements and brand collaborations, both of which contributed to the accumulation of wealth. On her TikTok account, which is accessible through the username @sherinicole, she is primarily famous for the popular lip-syncing and dancing videos that she posts.

In addition to this, she is famous for being the mother of the well-known TikTok star Addison Ray. She has a personal account on TikTok, and she also has a highly popular account on the YouTube channel that her family runs, which is called Livin the Lopez Life.